“..OUR DESIGN DELIVERS, COVERING ALL TERRAIN”

From gliding and tip riding, to surfing in powerful conditions, the requirement for a modern longboard is versatility.  Our design delivers, covering all terrain. From young to old, new school through traditional styles, first wave rides to decades of experience.

With low entry rocker and full outline you’ll find a board that glides in the small stuff and can be ridden from the front. Progressive surfers will find a quick midsection, slightly pulled tail, with enough release to keep the board fast and loose.  2+1 fin set up.

THE LATEST UPDATE ON ONE OF OUR MOST LOVED SMALL WAVE WEAPONS EVER!

With a full nose, extra foam under the chest and a smooth, flat continuous rocker for easy acceleration and paddling speed, 2018’s Psycho Nitro is the latest update on one of our all-time favourite small wave weapons! Now available in HYFI, the extra flex and pop allowed by our new tech matches up with the Psycho Nitro’s already insane grovelling ability to make an incredibly fast, light board that will give you the absolute best chance to enjoy weak conditions. For this year, we’ve also eliminated the flyer, pulled in the swallow tail a touch more, and deepened the concaves. This complements the Psycho Nitro’s other features by providing a lively rail-to-rail feel that’ll have you drawing lines in average (or even terrible) waves that simply aren’t possible on other boards!

Best performance of PSYCHO NITRO will be in average to fun waves between 1 and 4 feet. PSYCHO NITRO has been tried and tested world wide in everything from hollow 3 – 5 feet to full 1-2 feet onshore waves.

PSYCHO NITRO features a slight rolled vee through nose, running into a single concave under the front foot through to a double concave forward of the fins with a slight vee out of the swallow tail. This design allows for easy manoeuvrability while still giving the board maximum lift and speed. 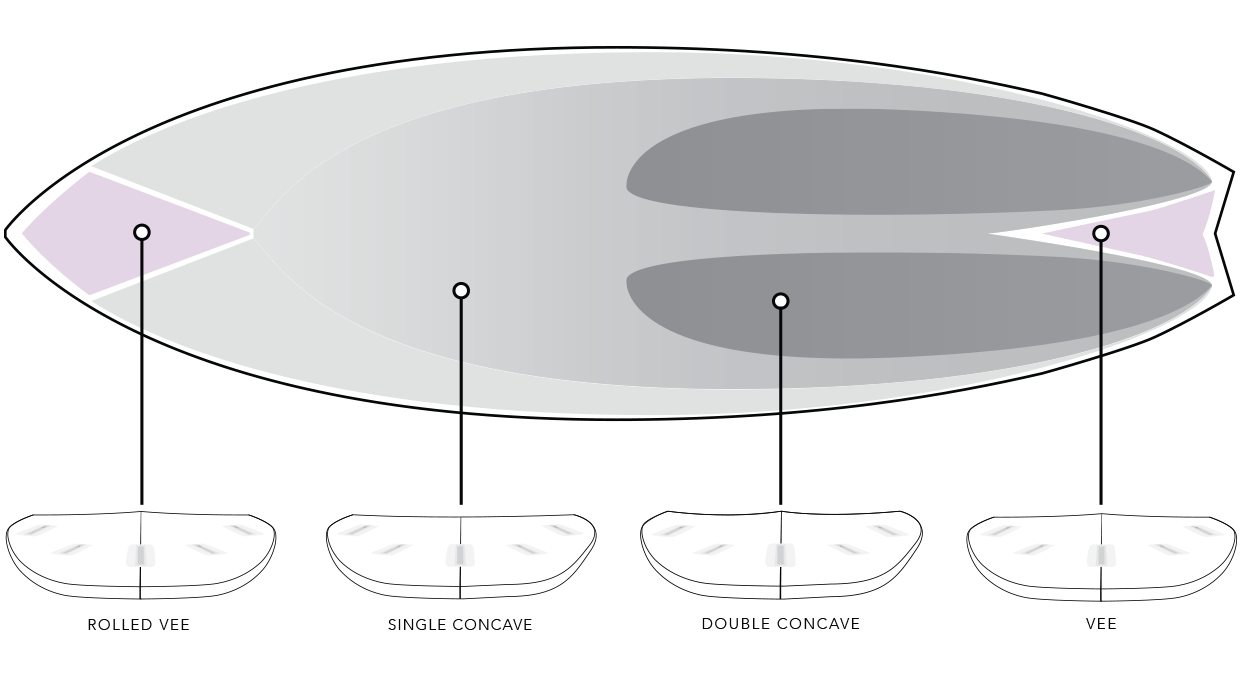 Introducing the Rocket Wide.  The incredibly user-friendly cousin of the Rocket 9.

“My brothers and I loved the speed and control we were feeling with the Rocket 9 and we wanted to see how we could apply those same levels of fun and performance to a board for small and gutless waves.  The Rocket Wide features a wider tail block to skate across flat sections and a wider nose area to accommodate for better paddle power.  It’s a shorter, wider skate machine designed to lift the fun factor when the waves are not at their best.  So don’t let those small days get you down because the Rocket Wide is ready for blast off!!” -Dane

It’s got the fun factor and flow of a twinny, the performance chops of a shortboard – the FishBeard is surfboard cross-pollination at its finest, and a beautiful-looking board to boot.

It was Parker Coffin who had the Eureka moment: “A Neck Beard 2 would work sick as a keel-fin fish!” So master craftsman Britt Merrick got to work, reimagining the back half of the Neck Beard 2, tinkering with the template, rocker and fin set-up, making subtle as well as swingeing alterations…

It's a board that subscribes to the “business in the front, party in the back” philosophy. The FishBeard’s still got the Neck Beard DNA that so many surfers have come to know and love, but it has a more playful streak, too, courtesy of the aft section: the freedom, the fruitiness of two fins rather than three.

You’ve got all the drive, speed and flow you ever wanted, centred around a front-foot sweet spot so large that it’s basically unmissable. Then when you engage the fins and rails with the back foot, the finely poised balance of pivot, hold and projection allows you to really rip into turns, surf aggressively, go vertical, or even get above the above the lip. Or of course just flow and cruise and draw the kind of classic twin-fin lines that are inaccessible to standard performance thrusters. The key thing is, though, that while it retains that uniquely enjoyable squirrelly twin-fin sensation, it’s not one of those twinnies that just goes from side to side (the standard complaint against twins).

We’ll let Britt, son of Al and head shaper at Channel Islands, break down some of the particulars (and see the below video for more).

“The thing about the FishBeard that sets it apart from a different fish is it’s got characteristics that make it more performance-oriented – one being the outline of the board. If you look at typical fishes, they usually have a pretty wide and a pretty wide tail, so that dictates it’s a fairly straight outline – when you connect that nose and that tail the only way to go is really kind of a straight outline.

“So what we’ve done with the FishBeard, to try and make it a little more performance, is add a little more curve to the outline, so when you look at the nose of the board, it looks more like a shortboard than it does a fish. It’s still got width, so that it has all the speed and flow that you want from a fish, but we’ve shed as much of the width as we can.

“And then the same with the tail, the tail’s got a little more curve, it’s a little more pulled-in than the average fish. So all that creates an outline that’s not [merely] lateral – that’s the problem with a lot of fishes, they’re just so lateral in the way that they surf. This one allows you to surf more up and down.”

Much loved by surfers around the world for the last eight years, we’ve set out to build a new board that does justice to the famous Blak Box DNA, which has always brought fun yet still exciting surfing to good, average and even terrible waves.

The success of our Monsta Box and Air 17X at the refined end of the X Series prompted JS to re-design our Blak Box to be even more suited to weak waves and surfers who don’t get their ideal choice of conditions day in, day out. It’s user-friendly, and it’s a must have to make the most of whatever window you have to get in the water each week.

BB3 features a single concave through the nose running into a double concave starting forward of the fins. This design directs water under your feet to maintain lift, speed and manoeuvrability.

We built the Air 17 for Julian to push the limits in fun, everyday waves from the Sunshine Coast to Sydney and California. It’s a board that over delivers, whether he’s dropping 10s at the Australian Open in sloppy beachies, or throwing some of the biggest combos of the year at perfect Trestles. Now, to cover an even wider range of waves, while maintaining the same magic core design features, we’ve created the Air 17X to allow the fastest, most progressive surfing possible no matter what the conditions are like.

Shorter, wider and flatter than its Performer Series genesis, the Air 17X is the perfect step-down to maintain a shortboard’s performance advantages, while exaggerating your small wave abilities. Even faster off the mark and through flat sections, it has the same large sweet spot thanks to more foam redistributed under front foot and a flatter rocker through the middle. Soft, forgiving rails, deeper concaves and similar late curve in the nose and tail allow you to go anywhere you like in weaker conditions, with as much speed as possible. Our most high performance X Series board, the Air 17X is ridden an inch shorter than the Air 17, and it’s ready to take your absolute best surfing to an even wider range of tiny to average, fun waves.

Much loved by surfers around the world for the last eight years, we’ve set out to build a new board that does justice to the famous Blak Box DNA, which has always brought fun yet still exciting surfing to good, average and even terrible waves.

The success of our Monsta Box and Air 17X at the refined end of the X Series prompted JS to re-design our Blak Box to be even more suited to weak waves and surfers who don’t get their ideal choice of conditions day in, day out. It’s user-friendly, and it’s a must have to make the most of whatever window you have to get in the water each week.

Our new Blak Box 3 is all about easy acceleration and glide, so to achieve this we’ve given it more planning area in the nose and extra foam under the chest. To control and play with all that speed, the wide point has also been moved forward, which creates a slightly straighter, pulled-in swallowtail. This provides a smooth rock and roll from rail to rail, giving you extra drive and angles of attack to choose from anywhere on a wave. With slightly lower rails to complement its updated outline, we recommend riding the BB3 at 1/16” thicker than your last Blak Box.

For the pros, this board is an exceptional step down to cover you on days that the surf would otherwise be less than inspiring. For the bros, it’ll be the go-to when those conditions are the only option you have.

use discount code: SASURF at check out